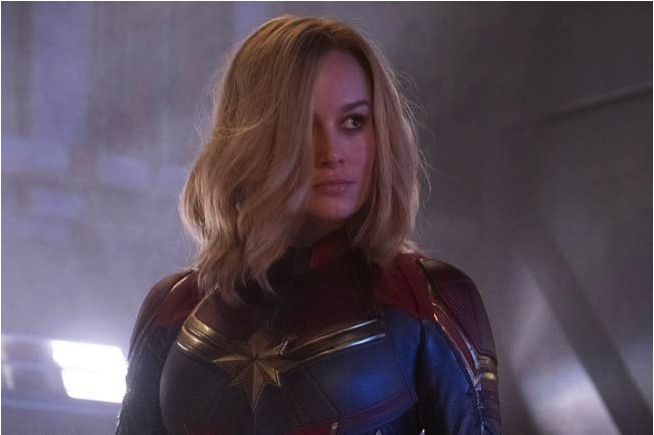 Right…now to talk about a highly anticipated, yet polarising piece of modern cinema that gets the next phase of the Marvel Cinematic Universe rolling, while also being a 1st in 2 ways.  We’ll begin with the elephant in the room – Stan Lee.  Stan Lee’s passing in November 2018 makes this the 1st Marvel film that he will never get to see (Unless eternity allowed it).  It is also the 1st Marvel movie to have a heroine in both the title name and the lead role in this series.  So lets get busy.  This is Captain Marvel.

Our story begins on Hala, the Capital planet of the Kree, where Vers (played by Brie Larson), a member of the super-villain team called Starforce, keeps waking up to reoccurring nightmares involving an older woman and a mass of chaos (Might hit close to home for some in that description).  The Kree are at war with the Skrulls, who end up incapacitating Vers during an infiltration, and trying to pry her memories open.  Vers eventually escapes, and ends up in Los Angeles, USA…The year is 1995.  It is then that Vers goes on an investigation – who is this woman in her dreams, and what are these memories?  Did I mention that she meets Nick Fury and Phil Coulson from SHIELD?  No? Well, she does.

Now onto the building blocks.

Compared to other Marvel movies that I’ve seen, the acting for the most part is very solid.  But it doesn’t make me too invested in what I’m witnessing.  Nobody is bad, and the performances of returning characters are what you expect.  It’s also nice to see Clark Gregg return to Marvel Movies, even though it meant that Agents Of SHIELD Season 6 ended up only doing 12 episodes instead of 22 with his appearance here.

The characters for the most part are a little bland outside of Nick Fury, Carol Danvers (Vers), and of course the unofficial star of the movie…Goose The Cat.  Goose is likeable to the point that I want to see this character expand into later movies.

The story is a little all over the place at times, but it hits all of the cues at the right times.  Although the issue that some people might have is that there isn’t really a struggle.  In other movies you look at the struggles of these heroes; For instance, Tony Stark has the magnet near his heart, his alcohol dependence, his reliance on a suit to fight crime, and his moral obligation to have a superhero register.  Although these themes have been covered over many movies, Carol’s struggle involves coming to terms with being lied to and trying to overcome gender disadvantage, in which her struggle is mostly in the past, when she was growing up in the 1970s and 80s…and yes, Boys are and were prone to being pricks in this area when such behaviour was endorsed.

The art design comes across as slightly uninspired outside of how Hala looked at the beginning and the presentation of 1995.

The music is quite awesome, with the likes of Happy When It Rains by Garbage, Come As You Are by Nirvana and Whatta Man by Salt N Pepa as part of the soundtrack – along with a really well placed song by No Doubt.  As a fan of 90s music, this is among my favourite soundtracks in the MCU.

The special effects and CGI are evident, but still well done.  I can’t say much else that hasn’t already been said about other Marvel movies that I’ve covered.

The Cinematography is strong, and if you’re more interested in the type of cinematography where good cinematography doesn’t get talked about, then it’s great.  However it doesn’t have too many shots that would make me stop the movie to look at…Unless it’s Goose The Cat.

Would I recommend Captain Marvel?  If you are a fan of the Marvel Cinematic Universe, then yes – because within the context of that universe, it is essential viewing.  It is not in the same league as numerous other Marvel movies (such as Avengers Assemble, Captain America: The Winter Soldier and Guardians Of The Galaxy).  But it is better than some other Marvel movies.  In particular, The Incredible Hulk, Iron Man 2 and Thor: The Dark World (Although to be fair, most movies in general are better than The Incredible Hulk).  If you compare it to the other recent ‘1st Female Superhero’ Title movie, Wonder Woman, there is no comparison – Wonder Woman is absolutely the better movie.  If you’re not into the Marvel Movies, at least watch it for the Cat Humour, the ’90s nostalgia and the explosions.