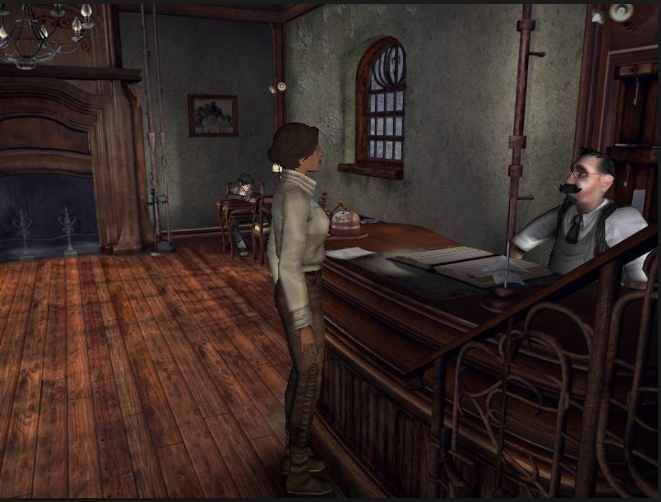 In April 2017 (as of this review), after 13 years of waiting and 8 years of development hell, fans of the series finally get the third chapter to this story, and to celebrate 15 years since the release of the first chapter of the series on PC, I’ll be reviewing Syberia.

Created by Belgian comic book artist Benoit Sokal, Our story is set in the early months of 2002 and revolves around a young woman named Kate Walker.  Kate is a Lawyer from New York who is on a business trip to Valadilene, a remote village in the French Alps that’s best known for its Spring-Automaton Factory (as well as the frequent use of Automatons in the everyday life of the residents).  On the day that Kate arrives, the funeral of Anna Voralberg, the owner of the Automaton factory, was taking place.  As of her demise, a Toy Factory in America wants to buy the Voralberg business, which is why Kate is there – to try and get a signature, go home to her fiancé, Dan, and get a good pay day out of it.  However…not all is as it seemed.  It is then revealed in one of Anna’s last confessions that her younger brother, Hans Voralberg, who supposedly died decades ago, is in fact alive, well and far away, and is officially the sole heir of the factory.  Now the goal has gotten enormous – Kate must find Hans – a man whose father was ashamed of because of mental disability (from a fall that gave him a permanent mental outlook of a 12 year old)…but is also the man who invented incredible automatons everywhere he went and expressed his fetish for Mammoths on top of that.  This leads to Kate boarding what was Anna’s Automaton train (which Hans invented), and along with the Automaton Train Engineer, Oscar (Also a Hans invention), she travels east, possibly in the direction of Siberia, and stops along the way when she has to wind the train up again and gather clues of his whereabouts.

Now to discuss the various bits and pieces:

First of all, the Art Style of Syberia, and the imagination that went into it, is by far the show stealer of the entire game!  I absolutely adore this game’s world and its visuals.  Consider this; Steam Punk mixed with Art Nouveau!  It’s like a match made in heaven, and I love it!  I love the fancy, curved building styles, I love the University that has Dinosaur and Ice Age displays in their halls and a full blown Botanic garden as part of the train station.  I love the creepiness of the antagonist figure’s lair, as you can sense both the madness and loneliness of this individual.  I love the Spa Resort and its intense isolation…There isn’t a visually dull moment in this entire game

Look at that office! 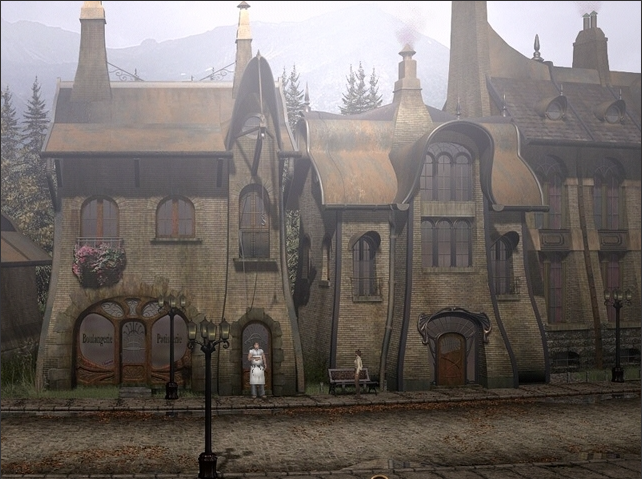 The Graphics were good for their day, with Kate and Oscar being the best looking character sprites.  But today we see just how rough around the edges it is.  The characters still have their visual quirks present, but at time you’ll be reminded of Sprites that came out during the later PS1 period, more specifically, Final Fantasy VIII comes to mind in terms of occasional visual quality.  When compared to Deadly Premonition, at times, you might even suggest that they are on par in places…and those are 2 games that came out 8 years apart.

The Animation can be divided into 2 parts, the cutscenes and the in-game; the cutscene animation was really good for what was possible in 2002, and while it looks like a PS1 cutscene today, the actual visuals it presents are still mesmerising.  The gameplay animation on the other hand left a lot to be desired and is incredibly clunky, especially on the console version.  I wouldn’t call it laziness, it’s simply a lesser emphasis or a buffering transition, much like the charming but choppy Sherlock Holmes games that frogware are still making.

The Gameplay follows the formula of the Broken Sword series, and its quality sometimes depends on what platform you’re using.  As a point and click adventure game on the PC/Mac, it’s a pleasure.  But on a console level, you’ll find yourself running into a lot of invisible walls and tread-milling against furniture.  On top of this, I’ve experienced an interesting difficulty spike – 1 were out of the 4 areas you explore, the second 1 is by far the most difficult because the area comes across as so vast and you’re backtracking so much between different parts of the level.  But at the same time, it’s possible that by levels 3 and 4, the learning curve levels out a bit as you get good at the game and the unusual demands of some characters become a normal part of progress.

The Voice Acting is 2 or 3 parts good and 1 part bad.  Kate Walker, Oscar, the phone call characters, and some of the more memorable characters were well done.  The only complaint that could be made was the transitioning of the dialogue.  Other than that, it was great.  The worst voice acting?  Definitely the NPCs in the Barrockstadt.  The best is Kate herself.

The Characters could come straight out of a Jean Pierre Jeunet, Terry Gilliam or Wes Anderson film.  They’re incredibly quirky and “delightfully french”…or maybe delightfully Belgian if we’re treating Sokal like he’s Hercule Poirot.  Kate herself is a likeable character, and as the story progresses she becomes more and more sarcastic and accepting of the absurdity of her adventure.  Oscar has his C3PO moments, and part of the humour between him and Kate comes from him indicating that he isn’t designed for anything other than what he’s designed to do..and has moments of double standards.  Their relationship is very like Captain Kirk and Spock in Star Trek, which adds a nice touch.  It’s also intriguing how Kate grows while so far away from home.  Just by the phone calls from her fiancé, her co-worker, her boss and her mother, you learn a lot about her – and as it all progresses, you notice the dilemma she’s experiencing.  This 1 job is costing her home life, her relationships, and she might get fired, and at the same time she is experiencing an adventure that she didn’t think would be possible when she arrived in France…it’s pretty well executed.

The Story is that of the quest – Kate is searching for Hans after finding out that he’s alive, and is doing everything she can to finish her job (her skills as a lawyer make her a strong persuader and negotiator), which also leads her on a journey of personal discovery and development.  Throughout the trip, she experiences sacrifice – mostly in the form of her home life back in New York.  It brings up the question of whether you should take the personal decisions and accept the risks, or go through the motions of what others expect you to do (in this case, all the time).

The Music is wonderful, and memorable, and capable of setting the scene while having a whimsical aura about it.  I’m even listening to it now as I write this.

Would I recommend Syberia?…Yup!  It has its flaws, and it has aged in several different areas.  But there are other areas that make for a timeless experience, and since it’s set in 2002, we can argue that it’s more of a period piece that mixes realism with surrealism.  Highly recommended if you want something different, and also recommended if you want a very good adventure game.  Syberia 2 is proving to be as interesting and fun, so you’ll hear more about that soon.  So, if you have a PC, PS3, Xbox 360, PS2, Xbox, Mac or Nintendo DS…consider a look.