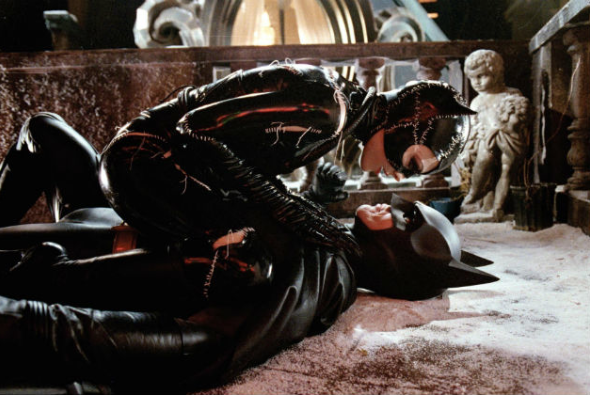 I dedicate this review to Vincent Andrew Schiavelli, who played the minor villain known as The Organ Grinder in this film.  He passed away 10 years ago today.  An excellent character actor who once gave a soviet policeman a real pineapple while on the set of Amadeus (something they didn’t see outside of a picture on a tin can).

First I reviewed the 1989 film ‘Batman’ on Christmas Eve, and on Boxing Day I review this; why?  Because I took a break somewhere in between.  Now onto 1 of the great Christmas-themed Batman stories, this is Batman Returns.

Though it was released in the June of 1992, Batman Returns is very much a Christmas movie.  It has snow, it has lit-up trees, and lots of well-dressed people buying things in what can only be described as a Nostalgic image of what Christmas used to be.  This time, instead of just 1 primary villain, we have either 1 and a half or 2 and a half…I’ll get to the half in a second.

So, what’s our story?  Well, we begin with a flashback scene.  A child is born to millionaires Tucker and Esther Cobblepot with deformed hands that resemble crab claws, and is so grotesque and evil that they decide to abandon it like an unwanted puppy…by throwing the baby buggy over a bridge, into a stream, that leads to a waterfall into the sewer.  The baby is then found by some penguins living at Gotham Zoo.  Fast forward 33 years later; Gotham officials are lighting the Christmas tree in the city plaza, and a legend about a Human-Penguin circulates around Gotham like a sighting of Big Foot.  We then come across 1 of our main villains, Max Shreck (played by Christopher Walken, and not looking like a big green ogre), a powerful businessman who is secretly finding ways to make a profit while either oppressing, starving or killing anybody in his way (but passes himself off as a type of Santa Claus to the public and 1 who will provide them more power…rather than sucking it dry, which is what he plans).  2 things happen; first he is blackmailed by the abandoned Cobblepot Child, now grown up and known as The Penguin (the primary villain, played by Danny DeVito), who has gathered up character-destroying evidence against Shreck, based on what Shreck himself had flushed down the toilet (including anything that was put through a paper shredder), and then Max (or thinks he did anyway) kills his secretary Selina Kyle, who finds out about his secret plans.  She then has her own “resurrection” similar to The Joker, and becomes known as Catwoman, the “half” of the 2 and a half villains…because we really don’t know where she stands.  In the process, Shreck sets up a chain of events to make the Penguin look like a hero, who then finds out his connection to the Cobblepots as their abandoned son, and then he makes plans to become the next Mayor.  Where does Batman fit into all of this?  It’s Bruce Wayne’s disagreements with Shreck, his knowledge of Penguin’s Red Triangle Circus Gang (who have been terrorising Gotham), and his relationship with Shreck’s now confident and even more unstable (and steaming) secretary Selina Kyle.

As a sequel, this film has some returning cast and crew; Tim Burton returns as Director, Michael Keaton as Batman/Bruce Wayne and Michael Gough as Alfred.  But it also features an excellent cast of new actors with new characters…and I loved it!  Danny DeVito played by far the best version of The Penguin ever done in live-action (I think Nolan North’s version of Penguin in the Arkham Video Games is better…but those are video games), Michelle Pfeiffer’s performance as Catwoman is legendary…and still worthy of many teen and single adult crushes.  And Christopher Walken…Yes, Max Shreck may be a character who is exclusive to Tim Burton’s Batman universe, but Christopher Walken was great fun to watch as this character, even though he was playing it “seriously” rather than too eccentrically.  Michael Keaton as Bruce Wayne/Batman and Michael Gough as Alfred remain as great as ever.  Good show from all of them, and no Robert Wuhl as Alexander Knox to make me cringe.

As for the characters the actors played; It was all great!  Jack Nicholson’s Joker was brilliant, but I enjoyed Pfeiffer as Catwoman and DeVito as Penguin much more…in fact, something about DeVito as Penguin already had Joker written all over it…at least when it came to his schemes and tricks and toys against Batman.  Also when he is (clearly) being a dirty man around beautiful women, his figure of speech can be very funny.  On top of this…and this is important…Penguin and Catwoman have a surprising amount of moral grey area to them.  There is an obvious tragedy to Penguin, and he obviously did what he could to survive and claw his way up into the real world, as he didn’t receive the same opportunities as other people due to his parents’ selfish perspective of family honour.  As for Catwoman/Selina Kyle, the reason for her insanity is very justifiable.  She was under appreciated, received a lot of sexism, experienced a lot of anger and self-loathing, and was nearly killed by her own boss, who wasn’t very good to her.  While Joker was a career criminal, Penguin and Catwoman’s positions could have been more easily prevented, had the people in their lives not been so cruel.

The story isn’t as simple and easily-digestable as the 1989 prequel, as it chooses not to be so black and white.  But the writing is much funnier (and dirtier), the characters are written in greater depth and the story is both darker and more grown-up.  A part of me thinks that Tim Burton had a little more freedom when working on this, and though it’s still acting as a bridge between comic book fans and the mainstream audience, they’ve offered a lot more to comic fans for this 1, and Tim was allowed to apply a much more gothic tone as well.  The story isn’t entirely waterproof though, especially when it comes to The Penguin.  We aren’t told how or why he is able to speak so clearly, or be so intelligent, or meet a dangerous travelling circus and become their ringleader when he lives in a Penguin home at the Zoo.  It’s also not clear how he was able to get TVs in the Penguin enclosure (unless he found working 1s in the dump and did the wiring himself), or how he was able to get the toys he likes to play with.  It’s not clear…but at the same time it depends on us as an audience.  There was a lot more suspense of disbelief back then.  We’ve grown up and changed to expect more from our movies now.

Danny Elfman returns as film composer with no Prince in sight.  He does 1 song with Siouxsie and The Banshees (A Band I would associate a lot more with Batman than Prince), which sounds a lot less dated than Prince, and Elfman retains the main theme with a slight remix, and with a lot of new music to go with it.  Here’s the 5-stars that the prequel could have had.

The cinematography and special effects are fantastic in this film.  If they made mistakes in the 1989 prequel, then they definitely refined and improved upon it, and learned.  They continued to use miniatures and use clever photography tricks and lighting, but this time Gotham looked less like a set, and is even more stylised again…perhaps adding a lot of fake snow helps.  Either way, it still looks great, even over 20 years later and on blu-ray.

Would I recommend Batman Returns?  Very much so!  I actually enjoyed this film much more than it’s prequel.  Though it continues it’s trend of updating the 1960s TV show with Tim’s Gothic imagery and style, I thought the film was executed much better.  The characters are better, the dialogue is funnier, it’s darker, the special effects were even better than last time, and several very annoying choices from the last film are completely absent in this 1.  I wouldn’t suggest seeing this film on it’s own (You need to see Batman 1989 at least once first), but I do think it’s superior to it’s prequel, and has aged better.  The cast of actors were more fun, the characters were great fun, and in general, 1 of my favourite Christmas Movies.  I’m aware that this film only took in 4 times it’s original budget (rather than the 10 times it’s original budget of the prequel), and the budget was 1 and a half times the size.  But despite it being enough to make the higher-ups at Warner Bros drop Tim Burton when making Batman Forever, I think Tim made the best live-action Batman movie for over a decade to come….and made me wish he did do that Catwoman spin-off with Pfeiffer 10 years before that Halle Berry movie…but hey, c’est la vie.