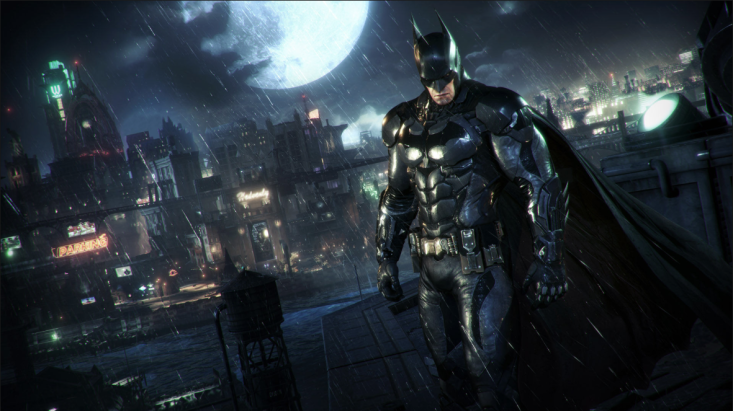 Before we begin, I need to say this:  If you haven’t played Arkham Asylum, Arkham City & possibly Arkham Origins, do not read this review.  It will contain spoilers to those 2 or 3 instalments, and I wouldn’t want to do that…because I love you.

So, here it is.  Not only is this my first PS4 game review, but it’s also the review of the last Batman Arkham game to be worked on by the developers Rocksteady.  Much like how some franchises in video games get handed over and demonstrate questionable quality afterwards (I’m looking at you Crash Bandicoot and Spyro The Dragon), knowing that this is their last 1 feels quite sad…but also a way to cement their legacy and getting out while they’re on top form…So…Batman: Arkham Knight.

Set 8 months after the events of Arkham City, during Bruce Wayne’s 8th or 9th year as the Dark Knight, Wayne continues his work as Batman, despite it being evident that his arch nemesis is completely gone…seemingly.  And He still has the rest of the villains to deal with.  Then, on Devil’s Night (October 30th), something happens…After being declared dead or missing, “The Scarecrow” Jonathan Crane reappears in Gotham City.  With a new fear toxin, which is given a demonstration in a ’50s style diner, he threatens the whole city into…desertion.  Over 6 million people are evacuated, and the petty criminals mixed with the super villains are left behind.  The only good guys left in the city, which consists of the GCPD, Batman, and his family (Robin and Oracle), are given the goal to take them down and reclaim everything…then…a new villain shows up…someone who knows Batman’s approach, has a billion-dollar army behind him, and hates Batman so much that his determination to destroy him outranks even the most dangerous criminals in Gotham…His name is the Arkham Knight.

Before I go into too many details, I’ll say this now; Wow!  The weather effects, textures and lighting in this game are absolutely phenomenal!  It’s not difficult to say that this is 1 of the best looking games I’ve played so far…and this is considering that the graphics for the Arkham Trilogy on the PS3 weren’t on par with a lot of their competition, even for their time (primarily Naughty Dog games).  So yes, graphics.  Absolutely beautiful and by far the best looking Batman game to date.

Now onto other areas:  Story-wise, Arkham Knight is not the best in the Arkham series (by Rocksteady, I mean), but it is by far the darkest episode of the series.  Literally, it’s 1 with an even greater uncertainty than Arkham City…especially when Jim Gordon says at the beginning “This is how the Batman died…”  What does he mean by that?  You’ll have to find out by playing it.

Gameplay-wise The Arkham series has reached it’s magnum opus, especially in the parts that have been explored before.  The fighting mechanic is even better in this game than all of the others (which says something, considering Arkham City’s perfectly crisp and polished gameplay), and is a real pleasure to play.  It is also the first game to allow players to drive the Batmobile (and even provide DLC where you can drive the Batmobile from Tim Burton’s movies).  The Batmobile elements of the game are very good, but they’re also the worst part of the experience.  It’s great to drive, but has been incorporated almost too much into some of the puzzles, including the Riddler Challenges.  Still, it works well, and the new ways to fly are amazing.

Design-wise, It’s clear that we’re no longer in Arkham City, or even the area of Gotham that was explored in Origins.  There’s a Riddler trophy that points this out, when the major landmark of Arkham City can be seen from where you are…across the pond.  Instead of cutting and pasting, Rocksteady decided to build a whole new part of Gotham.  1 that provides an enormous sense of scale and height.  Wayne Tower comes across as dwarfing the tallest Arkham City buildings, the streets are wide and full of cars, and due to the game taking place on halloween, there is also a lot of loose foliage and the litter that was missing from the Gotham TV Show.  Also, check out China Town in this game.  It’s really well presented.  As far as character designs are concerned, they’ve made some changes here and there, but mostly in Jim Gordon, Alfred and Scarecrow.  Everyone else is a crisper, oiler, skin-pourey version of earlier designs

Voice-acting-wise, everybody does an awesome job.  A majority of the voice actors from previous games have returned, and any different actors outside of Scarecrow try to match the original voices.  Scarecrow’s voice is evidently different.  Voiced originally by Dino Andrade (who voices Gnomes in World Of Warcraft, among other things), we’re now given the voice of John Noble (Sean Bean’s dad in Lord Of The Rings: Return Of The King, and Henry Parish/Jeremy Crane in the Sleepy Hollow TV Show), who has quite a deep and creepy voice.  It’s a different approach, but it works well.  Jim Gordon also changed, with a different voice and a design similar to Origins.  It works well too, despite a lack of continuity there…perhaps he got a hold of some hair dye.

The music sees Nick Arundel return, but not Ron Fish.  Fish has been replaced with David Buckley, who is best known for scoring Metal Gear Solid 4: Guns Of The Patriots…no wonder the sound got dark, brooding and unnerving at times!  Still, it’s an awesome soundtrack that suits every scene and the scenario as a whole.

As far as characters in the game are concerned, it’s an awesome line-up and you won’t be disappointed.  Some newer villains also appear via side-missions, but I don’t plan of spoiling them.  I will also say it now, The Riddler’s very funny in this 1.  It’s hard not to love a character who is so intelligent, and yet so stupid at the same time (1 reason to love Ultron in another Universe).  Also, the development of Batman’s relationships in this game are quite brilliant.  We didn’t see that much of his interactions with Robin, and definitely not Nightwing.  But this time, they have some time to show us what it’s like to be the “hidden Bruce Wayne”, the 1 who is the teacher.  Also, if you like your comics, you’ll see some references to the more legendary books (like Alan Moore’s Killing Joke, to name 1, I won’t mention another legendary 1).

Would I recommend Batman: Arkham Knight?  Well, it’s 1 of the primary reasons why I got a PS4 to begin with (After Square Enix didn’t give any release dates to 2 certain fan favourites other than “2016 or ’17” at E3).  And Arkham Knight failed to disappoint. While the story isn’t as tight as ‘Asylum or ‘City, it’s still excellent.  It’s full of emotion, reeks of noir, plays on the heart-strings well, and provides a lot of reasons to keep playing, even when the main story is complete.  It’s a game that ends Rocksteady’s run with the franchise on a high note, and an excellent reason to get a next-gen console (but not the PC version, which was said to have been a disaster).