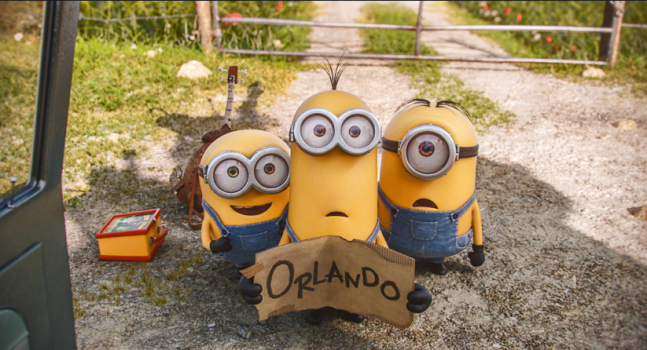 Here we go, a film I’ve been waiting to see for over a year, and 1 that brought us a trailer that was on-par with most short Minion Movies.  So…the Prequel to Despicable Me…how was it?

Minions is designed to provide some exposition to the little yellow people themselves.  What are they?  Why do they do what they do?  Why are they so fascinated with Bananas?  Why do they wear Blue denim overalls?  Why do they like ’60s music?  Why did Gru employ them for the other 2 movies?  Well, these questions are all answered in this film…and a part of me thinks this is the reason it exists.

So, what’s the story?  Well, we’re shown how Minions became interested in serving the biggest, baddest villain of the time period, whether it came in the form of large organisms consuming others or when a boss dies and they go searching for another 1, or simply when their previous boss is defeated by another.  We’re given their history, and then we’re provided with how they end up disappearing from history for several centuries, when they find a safe place to live and create their own community.  However, in time, they grew bored and aimless.  So in 1968, 3 Minions, Kevin (The tall, sensible 1), Stuart (the chilled-out, lazy 1) and Bob (the smallest, youngest and most timid 1) set out on an adventure to find a new boss, which will come in the form of Scarlet Overkill (played by Sandra Bullock in her first villain role ever).  What can be said about the story?  I’ll say that it’s simple, but I’ll also say that it’s by far the weakest of the Despicable Me trilogy.  But you know what?  The story is the main reason this film is not as good.  I appreciate the exploration of a Minions back story, as well as the justification of their favourite things, and showing us how they ended up in the earlier films.  But the truth is, as funny and enjoyable as the Minions are, they need Gru to balance them out in the long run (They thrive in their short films.  But a feature length film does push them towards the edge a little bit).  Scarlet Overkill’s a good character, but she isn’t Gru.  The story has a number of unfortunate plot holes that are easy to spot.  And lastly, I found the humour ratio to be tipped more in favour of children’s humour more so than family humour (the other 2 films were pure Family humour).  It isn’t a bad thing, and there are some adult jokes mixed in.  But they’re not quite as prolific this time around.

The characters in Minions are excellent fun, which make the weak story a lot more watchable.  They have some very amusing casting choices, including Jennifer Saunders as Queen Elizabeth, Jon Hamm (Don Draper in Madmen) as Scarlet’s inventor husband, Herb (Who is very hip), Michael Keaton and Alison Janney as the Nelson parents (the Nelsons being a clean-cut “Howdy Neighbour” family), Geoffrey Rush as the movie’s narrator, Steve Coogan in several roles, and of course, the Twilight Samurai himself, Hiroyuki Sanada as the Sumo Villain.  It can also be noted that the film lovingly pokes fun at british stereotypes, with some working very well.

The movie’s art style is as strong as ever, but also a bit different.  They present the likes of New York and London as if they were photographs full of cartoon characters, which is a brilliant look!  Never mind the excellent CGI and animation that went into it.  The scenes of destruction are very well made, but I won’t spoil it by saying what happens.

The music, whether it was in its original form or sung by Minions, is brilliant.  You won’t hear anything by Pharrell Williams here, it’s all from the 1960s.  In particular, swinging ’60s.  Including music by The Turtles, The Kinks, The Who, Donovan, and others that have been covered by The Minions themselves.  Some great choices to go along with the movie’s score.

Would I recommend Minions?  Yes…but only if you’re a fan.  Minions (the characters, not the movie) need context.  Despicable Me 1 and 2 provide that context, which leads to greater enjoyment in their mini movies, and leaks into the enjoyment of this film.  If this is your 1st Despicable Me film, you’re not going to see the appeal right away.  It will appear childish and full of gibberish, and like a much superior version of the Star Wars Christmas Special in terms of that.  It is rather pointless and unnecessary.  But that doesn’t stop it from being a fun little film with a number of innocent laughs.