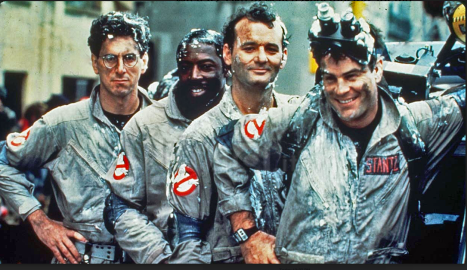 Well folks, it’s that time of year.  A week when most things have a horror theme to them – something even I’ve bought into, as the month of October puts me in the mood for horror (classic and modern) movies, TV shows and certain video games.  However, a question that can arise is “does horror have to be scary?”, and be thankful when I say that on numerous occasions, it doesn’t…just look at The Nightmare Before Christmas.  If anything, horror or goth or anything monster-related can be fun when left in the right hands – and right hands they were, with this little gem I’m going to write about.

Directed by Ivan Reitman (who directed Arnold Schwarzeneggar’s film Junior, about Arnie being pregnant, while his son Jason directed Juno, about Ellen Page bring pregnant) Our story revolves around 3 Columbia University professors; Peter Venkman (Bill Murray), Ray Stantz (Dan Aykroyd) and Egon Spenglar (Harold Ramis), who are called to the New York Public Library to investigate paranormal activities…before being chased out by Ghostly Librarian who transforms into nightmarish image.  Soon after this event, they’re fired from their jobs at the University for the simple reason that “They suck at being scientists”.  So they decide to start their own business by mortgaging Ray’s childhood home 3 times, and buy a dusty, abandoned fire station to start-up shop as people who catch ghosts for a living.  They hire a secretary (Janine Melnitz, played by Annie Potts), eventually become local celebrities, and Winston Zeddemore (Ernie Hudson) joins the group soon afterwards.

Now to break the film into pieces:  I loved this movie!  It has a charm and humour to it that was almost signature to late ’70s/early ’80s Saturday Night Live (the show that made Dan Aykroyd & Bill Murray TV stars).  The humour is much more “show, don’t tell”, with sarcasm, manipulation, subtlety, accepted nonsense, boys-will-be-boys behaviour (or men will be men in this case), and also features excellent writing to go with it.  The acting throughout the film is very good, at times a little over the top and cartoonish, but rather than being wooden or hammy, it’s charming.  There are practically no boring characters anywhere (at least from the main cast), and the cinematography’s very good.  The set-design and location choices are very well chosen – advertising New York for tourism purposes, as well as providing a realistic backdrop for our story and characters (particularly characters, because personalities like these wouldn’t work outside the North Eastern USA).  The special effects were incredibly good, particularly for the time – I found myself preferring the stop-motion animations and practical effects over most CGI.  Why?  Because you know it’s actually there.  They might have overlapped 2 rolls of film in the editing process, but the whole thing just looks really good for what it is.  Lastly there’s the music…Ray Parker Jr may have had a long and prolific music career, but this movie’s theme song is ‘him’, it is what he will be known for in many more decades to come, as it is easily 1 of the most recognisable themes of all time.

A part of me wonders how different (or similar) the film would have been if Bill Murray’s role as Peter Venkman went to its original choice, the legendary John Belushi (another Saturday Night Live cast member who worked with Aykroyd & Murray, and was the other Blues Brother with Aykroyd).  Belushi sadly died from a speedball in 1982, during the time when Aykroyd & Remis were writing the script for this movie.  Despite this “we’ll never know” instance, Bill Murray was absolutely awesome in this!  As the cynical, sarcastic, and yet endearing Venkman, it’s difficult not to like him, or laugh when he has something to say.  The other Ghostbusters are also great characters, often designed to compliment each other, with Ray being the child-like 1, Egon being the more nerdy, serious 1, Winston being almost like Mr Exposition (yet he’s going ahead with it, because hey, it’s a job), and Janine is basically the secretary who holds it altogether like a mother bird.  Signourey Weaver was also great in this as haunted civilian Dana Barrett, adding to her (at the time) small CV of famous movie parts, which included her role as Ellen Ripley in Alien.  As we know, she went on to do more amazing stuff after this – and she also managed to add a bit of sex appeal to the film without showing anything, other than a shoulder (something that you wouldn’t get today in most films).

Ghostbusters is not only 1 of the films that defined the 1980s, with its theme song that nearly made Huey Lewis a bigger millionaire via lawsuit and its instantly recognisable censored-ghost logo, but it’s a film that is the very definition of fun, which has helped it to surpass the ’80s cult status, and into the arms of timelessness…because in reality, a film only really becomes dated when the original, intended reaction becomes significantly lessened by the inflation of time and new material (allowing it to be appreciated for the time in which it was made).  Something that Ghostbusters hasn’t actually lost, because it’s still a very funny movie.  If there is anything out there today that could compare in fun factor to Ghostbusters, I would say the new Marvel Movies.  Because what’s the point in a movie full of unrealistic nonsense if it’s not well written and fun?  30 years on, it’s still awesome.