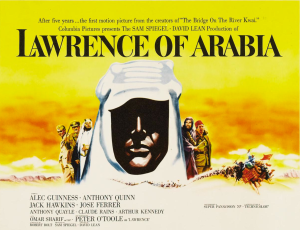 I came into watching Lawrence Of Arabia with little to no knowledge of the actual events, and it even covers an area of World War 1 that I’m not as familiar with (The Turkish Revolt).  But this didn’t stop me from enjoying this.  If anything, it created a certain degree of intrigue, in the same way that 1967’s Bonnie & Clyde revitalised an interest in the couple.  It demonstrates the power that movies have, that it would get people interested in doing some research to find out how much is true and how much is poetic license.

Our films starts like Citizen Kane.  Not in the sense that T.E.Lawrence (played by Peter O’Toole in his 4th film) is lamenting on his past, saying a random word and then dropping a snow globe artistically.  Instead I’m referring to the fact that we witness our main character die within the opening minutes.  We then see his funeral, where he receives massive honours, and then the question among the people is asked; who was Lawrence?  Afterwards we go back in time, to the first world war, where the young, highly intelligent, but also green, eccentric and misunderstood Lawrence is given an assignment to assess the prospects of Prince Faisai (played by Obi Wan himself, Alex McGuinness), a British ally who is rebelling against the turks.  After witnessing the death of his guide at the hands of Sherif Ali (played by Omar Sharif) then disobeying the orders of keeping his mouth shut, Lawrence eventually goes on an adventure that would be almost too unbelievable in real life, and yet there is truth to it among the lies to create a compelling narrative for cinema.

Now lets break it down and talk about individual characteristics that make up the film: The cinematography in this film is absolutely timeless.  They not only belong in cinema, they belong in a museum.  The sunrises and sunsets in the desert, the composition of the shots, the shot of Sheriff Ali approaching on his Camel, demonstrating the mirage effect that makes thirsty men see illusions, the colours, everything.  It may not have been “art-related cinematography”, this was pure, beautiful photography shot for cinema.  A beautiful use of a wide angle lens throughout.

In an unusual, and perhaps cultural way, while there are women in this film, none of them have any dialogue.  The acting is excellent, with Peter O’Toole showing a subtle but evident range of emotions, from naive curiosity to the laughter of madness.  Also, Alec McGuinness is in this…are we going to argue about acting quality with him in the picture?  The characters were mostly very good, with Lawrence, Prince Faisal, Auda abu Tayi (played by Anthony Quinn) and Sherif Ali proving to be characters of great interest.

The backdrop to the film is among the best I have ever seen.  Long before the days of CGI, everything was done either in a studio or on a location.  They shot some very key scenes in Morocco and Jordan.  But they also shot some of it in California (recreating the desert in Hollywood), England and many parts of Spain…which reminds me of Spaghetti Westerns when I hear that.  All excellently chosen.

The story itself is also excellent.  But at the same time it is an incredibly long film.  In cinema, it was watched in 2 parts, but at home  it was whole, which could be as long as 3 hours and 38 minutes depending on the version you have, and at its shortest it’s still over 3 hours long.  Despite this, a part of me felt like it dragged a bit.  Yes, we are provided with much development and narrative, but I sometimes question how tight the film really was.  At times it seems a little all over the place, and in general I thought it went at quite a slow pace, with the exception of the raids.  I know it was meant to be loosely autobiographical, but if this film was made 20 years later, it would have been vastly different, and perhaps a little more on the exciting side (think Indiana Jones)…But that’s just me.  If the acting wasn’t so theatrically magnificent and the characters (real or Sheriff Ali) weren’t interesting, I would only have liked the cinematography and the music.  However, it’s possible that I needed to know more of the history before I could really discuss the story beyond an entertainment level.

Would I recommend Lawrence Of Arabia?  Yes, it is a film that needs to be seen at least once, even if it’s for the cinematography, background and music alone.  Although, do have food nearby.

One response to “Lawrence Of Arabia Movie Review”